Infinity New Years Eve 2016 with Above and Beyond

Home/Infinity New Years Eve 2016 with Above and Beyond

Infinity New Years Eve 2016 with Above and Beyond 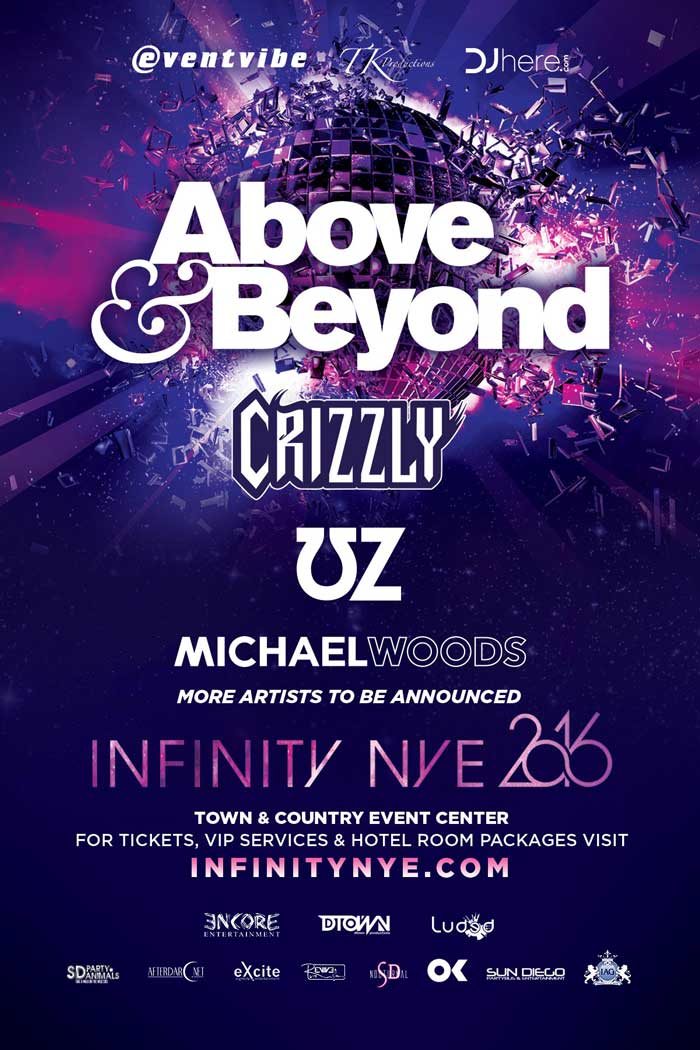 GET 10% off Tickets by using code “SDHM” at checkout

Check out the Event and Venue Map

CONNECTION. If one word sums up the phenomenon of Above & Beyond then that is surely it. Whether it’s the thousands of A&B fans singing their lyrics back at them at gigs from Beirut to Brixton, or the millions that tune in for their weekly Group Therapy radio show, connection – real human connection – is at the heart of all things that define Above & Beyond. Like just about everything they turn their attentions to, it is a labor of love as well as a collaboration of the trio’s energies. De La Soul weren’t wrong. Three really is the magic number: and in Above & Beyond’s case the magic is spreading faster than ever before.

“I’m Crizzly. I’m from Texas. I make Crunkstep.” Music became a part of Chris Lee “Crizzly” Marshall’s life at a very young age. As he recalls, he discovered it as a child-insisting on making his kindergarten class listen to the Space Jam soundtrack during naptime – but he didn’t formally embrace it until high school. Picking up a set of turntables, he scored his first gigs at birthday parties. At 19-years-old, production began to inspire him, and he started remixing rap songs from YouTube with a distinctive flare. He released his own takes on Waka Flocka Flame’s “Hard in Da Paint” and “Snap Back Swag” from AJ Hernz, and suddenly he set the blogosphere ablaze. Numerous web sites began reposting these cuts, and Crizzly developed a fervent following.

After the mysterious UZ came up on the soundcloud scene about 1 year ago, with the amazing Trap Shit series. With huge support from DJ’s worldwide, the likes of Diplo, Flosstradamus, Skrillex, Toddla T, Baauer, and Craze to name a few, UZ’s debut EP was released on Jeffree’s, a sub-label to Mad Decent. “UZ tunes are drunken energy sub bass and cartoon horn stabs that make my stomach feel weird and my feet shuffle,” Diplo writes.Raw and powerful, but with a laid back tempo, UZ gives listeners a chance to slow down without losing momentum.

After first breaking onto the scene, as a then teenager, with 2000’s top 20 UK hit ‘Warrior’, going on to produce Example’s only UK #1 & 1.5 million selling single ‘Changed The Way You Kiss Me’ and holding down his new Las Vegas residency at LiFE at the SLS, Woods is a well and truly established force to be reckoned with. 2015 kicks off with new material already slated for a consistent year on Diffused, and an exciting collaboration with UK Drum and Bass legend Roni Size. Stay tuned!

Bad Royale is a Southern California based DJ and producer group who, in the last year, have pushed and broken the boundaries of dubstep, bass, moombahton, and have gone as far as serving up their own genre known as “kingstep.” Bad Royale are known by those close to them as some of the hardest working producers in the industry, constantly trying to break molds and experimenting with new sounds to push their “kingstep” to new heights. If they are not playing a set, they are guaranteed to be found in the studio from morning to dusk.

GET 10% off Tickets by using code “SDHM” at checkout